If you know Broza you know I’m a bit of a boy racer at heart. For a large part of my life I have been a passenger in my father’s Alfa Romeo GT which has always been a thrill. I have all the fast and furious films on DVD and have owned every racing game you could ever imagine. I truly do have a need for speed. Now I shall list my five dream boy racer cars!

I shall start with the Renault Megane. Now I’m not quite sure why this appears in the list, and I guess you aren’t either. But there is something about it that has always appealed to me despite the weird back end. I guess it’s since mother Broza bought me one back in 2002, and I was so into my racing games at the time I think I associate my time in the Megane with it. The new models look so aggressive and right up boy racer street so they make the list. 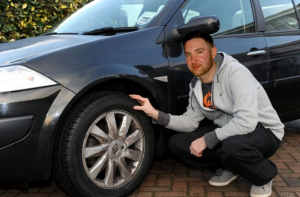 Me with a Megane

Another boy racer classic, the Seat Leon was introduced to the world in 1998 hand has been a favourite for teens who have a need for speed ever since. The Seat Leon has even had a stint in motorsport taking part in numerous racing events including the World Touring Car Championship in 2005.

Many people will be shaking their heads at this point; surely the archetypal hairdresser’s car shouldn’t be in a list like this? Well it is! The Audi TT has had a place in my heart ever since Need for Speed Underground 2. It was my go to a car and I enjoyed trials and tribulations with it. Much to the embarrassment of my mates I was going to buy a second hand Audi TT to replace my first car… but I had a test drive and it wasn’t as thrilling as it was in the game.

The Nissan 370Z was another car I grew to love through the Need for Speed franchise. Originally it was the Nissan 350Z which caught my eye, but I loved the 370Z which succeeded it even more. Now the Audi is beginning to run its course I’m finding myself looking at second hand Nissan 370z cars on the internet.

The RCZ is a car I’ve introduced to the list a little more recently, not surprising as the car was only introduced in 2010. But where the hell did it come from!? Who knew Peugeot had that in the bag? The Peugeot RCZ is a rival of my beloved TT, but I can’t hate, it looks sick!