The news of Schumacher’s departure from Formula One racing was inevitable, but it was still entirely heart breaking. However, every cloud has a silver lining, and it sounds as if Schumacher isn’t going to be completely divorced from the motor industry (as if he would!) It appears that he is now embarking on a new challenge, which will see him help Mercedes Benz in developing road cars. It would seem he is very much part of the Mercedes family, and has been signed up as an ambassador of AMG a role which has seen him making appearance at a number of launches, one of which was for the SL63 AMG. 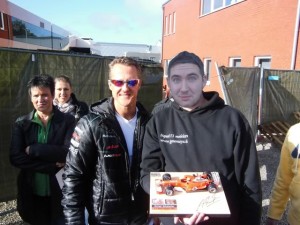 Me and the man himself at my 23rd birthday

He is no stranger to this kind of work, he has helped with the development of several Ferraris in the past, one of which was the FXX which was based on my beloved Enzo! One thing’s for sure, the man knows his car parts.

I’d give anything to have him fine tune my car, for now though I’m saving up for a spoiler to help my Fiesta’s aerodynamics.

This entry was posted in Racing. Bookmark the permalink. Follow any comments here with the RSS feed for this post. Both comments and trackbacks are currently closed.