What’s good everyone, Broza here, I’ve had a Mcdonalds breakfast, a krushem from KFC and a large margarita pizza from Dominos, so you know the Broz dog is in a mood to indulge.  Therefore I will now present you with some of the worlds Sickest Whips! The kind of whips that if they were a pizza, would come with double cheese and stuffed crust. That’s right ladies and gentleman this isn’t no Volvo ting! This is a cars that give you whiplash when they drive by because your tryna spy who’s inside kind of ting.

Let’s start things on a Hype, a 268 mile per hour hype! This is the Bugatti Veyron, the ultimate supercar, the Usain Bolt of the motor industry! This bad boy will cost you the best part of a million sheets and it’s hardly a surprise when you look at the state of it. It has the record for having the highest top speed of any roadster in the world for crying out loud. Now I ain’t ever seen one of these on road but it sounded like an absolute monster on the TV. Now what could make the Veyron even sicker!? 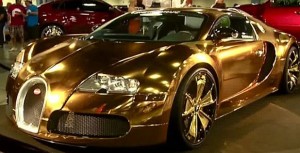 That’s right fam, an all Gold Bugatti Veyron, this wins the sickest whip of the year award easy. Must be King Mydus’s car or something. (Broza has it on good authority that this car belongs to the Flo Rida himself, my favourite rapper!)

Introducing the Lamborghini Gallardo. I remember the first time I ever saw one of these bad boys in a music video and it got me gassed! I hadn’t seen nothing like it to the point I thought it was just some special effects concept car kinda ting. The Gallardo was always going to be on this list, but I like to pick out one in particular for the Sickest Whip list. And the one I’m going to go for has a paint job the likes of which I’ve never seen, it looks absolutely nuts!

Told you! Now I’m not too sure about the story behind this inked up car, but I did read that the work was done free form by hand by a man called Jona Cerwinske, but I’ve also heard that it is a full vinyl. I don’t know what to believe, but one things for sure, this whip is Overly Sick!

Drums please….. Oh gosh. Third in the list is the Maserati Granturismo, a personal favourite of mine as I think it seems a little more classy than a lot of its rival whips. You can tell that Granturismo appeals to the more refined gentleman as it isn’t as easy to find some crazy paint jobs for it. But you can always rely on the Chinese to do something crazy. So here it is: 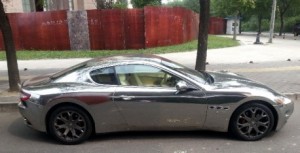 We’ve had Gold now say hello to our silver entry coming straight out of Beijing!

Last but not least, the Porsche 918 Spyder. Another car that is incredibly sick in its own right is the 918 Spyder which is the successor of the Porsche Carrera GT which I wasn’t too keen on. The mandem at Porsche really pulled it out of the bag when the made the 918 Spyder though still. And it looks like the kind of car that would be at home on the racing track.

That’s why I’ve picked this Spyder for my final Sick Whip, this ain’t no boy racer paint job, this paint job means business and it lets you know you ain’t gonna be beating my man at the lights.