Super cars are machines which get any red blooded man’s heart pulsing.  And the Broza Dog goes wild for them. They are stunning to look at and they harness a massive amount of power which will feed every man, or women’s hunger for a little danger and excitement. The only problem is you have to be extremely well off to afford the super car kind. But hey, let’s indulge ourselves a little.

The Mercedes-Benz SLR McLaren is a car that doesn’t immediately spring to mind when one mentions supercars, but a super car it is and we feel it deserves a little credit. First of all, it looks different, amphibious almost, meaning form me at least it wasn’t immediately attractive, but it is a grower. It looks a bit like the kind of car that would deploy parachutes when you break. Of course the performance is top notch and you can potentially do 200mph+! They are no longer producing them so if you wanted to get one you would have to consider a second hand Mercedes-Benz SLR McLaren, but even then you will have to be pretty rich.

Yes, of course we had to include a Lamborghini at some point. We needn’t say much about the Gallardo as you all know the deal, it’s like the Rihanna of the motor world; sexy, provocative and Chris Brown has ruined one. Fortunately the Gallardo is a little cheaper than the DLR Mclaren and whilst you still have to be pretty well off, you can get a second hand Lamborghini Gallardo for the almost modest price of £60,000, “almost” being the operative word.

The Maserati Granturismo is probably my favourite. It is nowhere near as common as the Gallardo but it’s hard to understand why. Some people don’t even class it as a supercar, but as far as I’m concerned it is a car, and it is super not to mention the fact that is can hit 62 miles per hour in 4.7 seconds. It is stunning to look at and that is all most of us will ever be able to do, as to own one you would need to front £82,280. On the other hand this is comparatively cheap when you consider the likes of the McLaren and the Gallardo. Meanwhile a second hand Maserati Granturismo can cost as little as £35,000! We can dream! 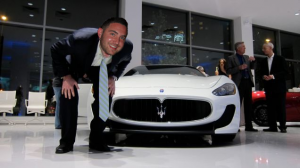 me at an event at the local garage

The Nissan GT-R is another one which in my opinion doesn’t get enough praise. It has been produced since 2007 and is truly a testament to the Nissan design and development team. I have been lucky enough to get behind the wheel of one of these bad boys and boy was it a thrill, oh it was frightening. It is another car that is up for debate with regards to whether it is a supercar or not, but if you consider the GT-Rs performance alone it’s hard not to agree that it is. A brand new Nissan GT-R would cost you a naughty £78,020 whilst a second hand Nissan GT-R would cost you anywhere between £35000 and £70000